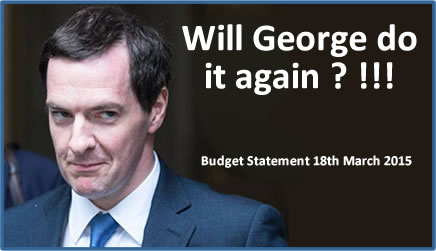 NOTE : These plans were eventuality scrapped by the Government

On this morning’s Andrew Marr Show (Sunday 15th March 2015) Chancellor George Osborne appeared to confirm exactly what has long been thought, that the Government are going to pave the way to allow people who have actually already purchased an annuity to be able to trade it in for a cash lump sum.
This will undoubtedly please some pensioners who might have the ability to make better use of a lump sum than a relatively small regular income, despite the fact that that the income will continue be paid for the remainder of their life. It might be even better news for the Government as we presume they will gain from a tax windfall. The annuity income like all money taken from a pension, after the preliminary 25 % tax free lump sum, will be liable to income tax. It is also possible that a lump sum payment from a traded annuity might push the pensioner into the 40 % tax band, and potentially higher.
Presently if asked by a client “when will I be able to cash in my annuity” our answer has been that regulations will not be passed (and products designed) till April 2016. Mr Osborne’s comments today seemed to verify this. This is unquestionably really interesting news, however there are a number of dangers and concerns that go with it.
Both ourselves and other industry professionals are concerned with some answers that are regularly given to questions about what occurs if an individual blows all of their pension fund in one go then finds themselves without any income in what could be a very long period of retirement. Andrew Marr once more pursued this concern this morning. The Chancellor’s response was typical of responses formerly given by himself and other ministers – he indicated that he believed such a point of view was somewhat patronising and that individuals could be ‘trusted’ to use their pension pots intelligently.
The pension flexibilities revealed last year undoubtedly caused much excitement and there are many clients preparing to take a huge lump sum, if not all of their pension fund, in one go as soon as the new financial year begins. Even if the large majority make financially sound decisions there will undoubtedly be some who will live to regret the option.
As a web company, our aim is to provide customers with all the information they require to allow them to make an informed choice. As we offer a nationwide service it is not possible for us to make a personal recommendation to consumers who we may never even talk with. We will offer our customers a non-advised service where they comprehend and accept that the decision to offer their annuity in exchange for a cash lump sum is completely theirs.
It is rather ironic that the statement to allow people to sell annuities was made in the very same weekend when the media was likewise reporting that the regulatory authority, The Financial Conduct Authority, has very specific worries that many consumers who did purchase an annuity might not have got the best deal. With the risk of future compensation claims, it could be that some annuity service providers might be keen to escape previous annuity arrangements they think might end up costing them further. However it is highly doubtful if such a deal is likely to be in the best interests of the customer.
There have been previous examples of governments blowing the trumpet proclaiming brand new benefits for people, only for those benefits to be shown to be rather dubious a few years later on. The announcement by the Thatcher government that people could contract out from the Second State Pension and their occupational pensions in favour of having the contributions paid straight into an individual pension in their name, produced a significant client demand. Undoubtedly many consumers on their own initiative chose to do this and sought out a company to help them accomplish it. However when it was subsequently proven that the client would have been better off sticking with their old plans, it was the financial advisers and insurance coverage companies who picked up the bill – in many cases unjustly. We did not have any such problems in our company, but we learnt the lessons from it.
Many advisors who remember the contracting out problms might hesitate to provide any guidance whatsoever that suggests to a consumer that they ought to offer their annuity for a lump sum. In effect they will state “do not do it, but if you want to, here is an application form”. All clients need to bear in mind the age old principle ‘caveat emptor’ meaning ‘buyer beware’.
Please do not believe we are against these changes, we are not – there would not be much point in running a web site offering the service. Nevertheless we are eager to make customers familiar with the threats which they will need to consider as they make the decision for themselves. For some clients it will certainly be a good idea, for others a potential error. It is very important that the customer comprehends that, with the industry being captured in the middle of the Government’s brand-new changes and what has actually previously been thought to be ‘best advice’, all finance companies might be very uncomfortable providing definitive advice in this area. The client will have nobody else to blame if they do make a bad choice other than themselves.